Can We Trust the Bible? The First Published (as opposed to Printed) Greek New Testament

In this thread on Bible translation, I have been talking about what it is translators of the New Testament actually translate.  In order to answer the question, I have had to explain how we started to get printed editions of the Greek New Testament, including the first to come off the printing press, the Complutensian Polyglot (discussed in yesterday’s post).  Today I take the discussion a step further, to talk about the first published (not the first printed!) Greek New Testament.  Again, the discussion is taken from my book Misquoting Jesus.

The First Published Edition of the Greek New Testament

Even though the Complutensian Polyglot was the first printed edition of the Greek New Testament, it was not the first published version.  As I pointed out, even though the work was printed by 1514, it did not actually see the light of published day until 1522.  Between those two dates a famous and enterprising Dutch scholar, the humanist intellectual Desiderius Erasmus, both produced and published an edition of the Greek New Testament, receiving the honor, then, of editing the so-called “editio princeps” (= first published edition).  Erasmus had studied the New Testament, along with other great works of antiquity, on and off for many years, and had considered at some point putting together an edition for printing.  But it was only when he visited Basle, Switzerland, in August 1514 that he was persuaded by a publisher named Johann Froben to move forward.

Both Erasmus and Froben knew that the Complutensian Polyglot was in the works, and so they made haste to publish a Greek text as quickly as possible.  But other obligations prevented Erasmus from taking up the task seriously until July of 1515.  At that time he went to Basle in search of suitable manuscripts that he could use as the basis of his text.  He did not uncover a great wealth of manuscripts, but what he found was sufficient for the task.  For the most part, he relied on a mere handful of late medieval manuscripts, which he marked up as if he were copyediting a handwritten copy for the printer; the printer took the manuscripts so marked, and set his type directly from them.

It appears that Erasmus relied heavily on just one twelfth-century manuscript for the Gospels and another, also of the twelfth century, for the book of Acts and the epistles – although he was able to consult several other manuscripts and make corrections based on their readings.  For the book of Revelation he had to borrow a manuscript from his friend, the German humanist Johannes Reuchlin; unfortunately, this manuscript was almost impossible to read in places, and it had lost its last page, which contained the final six verses of the book.  In his haste to have the job done, in those places Erasmus simply took the Latin Vulgate and translated its text back into Greek, thereby creating some textual readings found today in no surviving Greek manuscript.  And this, as we will see, is the edition of the Greek New Testament that for all practical purposes was that used by the translators of the King James Bible, nearly a century later.

in October of 1515 and was finished in just five months.  The edition included the rather hastily gathered Greek text and a revised version of the Latin Vulgate, side by side (in the second and later editions, Erasmus included his own Latin translation of the text, in lieu of the Vulgate, much to the consternation of many theologians of the day, who still considered the Vulgate to be “the” Bible of the church).  The edition was a large one, of nearly a thousand pages.  Even so, as Erasmus himself later said, it was “rushed out rather than edited” (in his Latin phrasing: praecipitatum verius quam editum).

It is important to recognize that Erasmus’s edition was the editio princeps of the Greek New Testament, not simply because it makes for an interesting historical tale, but even more because, as 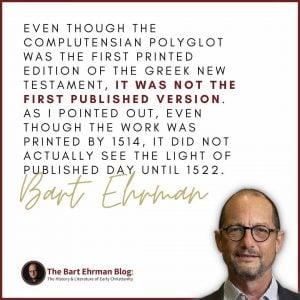 the history of the text developed, Erasmus’s editions (he made five, all based ultimately on this first rather hastily assembled one) became the standard form of the Greek text to be published by printers of Western Europe for over 300 years.  There were numerous important Greek editions that followed, produced by publishers whose names are well-known to scholars in this field, such as Stephanus (Robert Estienne), Theodore Beza, and Bonaventure and Abraham Elzevir.  But all of these texts relied more or less on the texts of their predecessors, and all these go back to the text of Erasmus, with all its faults, based on just a handful of manuscripts (sometimes just two or even one – or in parts of Revelation, none!) that had been produced relatively late in the medieval period.  Printers for the most part did not search out new manuscripts that might be older and better in order to base their texts on these.  They instead simply printed and reprinted the same text, making only minor changes.

Some of these editions, to be sure, are significant.  For example, Stephanus’s third edition of 1550 is notable as the first edition ever to include notes indicating differences among some of the manuscripts consulted; his fourth edition (1551) is possibly even more significant, as it is the first edition of the Greek New Testament that divides the text into verses.  Prior to this, the text was simply printed all together, with no indication of verse division.  There’s an amusing anecdote associated with how Stephanus did his work for this edition, as his son later indicated that he had decided on the verse divisions (most of which are retained for us in our English translations) while making a journey on horseback.  Undoubtedly he means that his father was “working on the road” – that is, that he entered verse numbers in the evenings at whatever inn he was staying at.  But since his son literally says that Stephanus made these changes “while on horseback,” some wry observers have suggested that he actually did his work in transit, so that whenever his horse hit an unexpected bump, Stephanus’s pen jumped, accounting for some of the rather odd verse placements that one still finds in our English translations of the New Testament.

The larger point I am trying to make, however, is that all of these subsequent editions – those of Stephanus included – ultimately go back to Erasmus’s editio princeps, which was based on some rather late, and not necessarily reliable, Greek manuscripts – the ones he happened to find in Basle and the one he borrowed from his friend Reuchlin.  There would be no reason to suspect that these manuscripts were particularly high in quality.  They were simply the ones he could lay his hands on.