Do All Modern Translators of the New Testament Translate the Same Greek Text?

If someone translates the New Testament today into English, French, Arabic, or Swahili — what exactly are they translating?  They must have access to some kind of Greek text.  But what?  Are there lots to choose from out there?  Are they wildly different from one another?  I pointed out in my previous post that the King James and just about all other versions before the end of the 19th century were based on a printed Greek text that is now widely seen as flawed.  So what do folks use today?  Or if someone is just wanting to *read* the Greek — what options are there?  Is there some kind of “official” version?

Blog readers occasionally ask me these questions and luckily there is a fairly standard answer known to almost no one but scholars.

When scholars translate the New Testament into any modern language, they almost always (apart from fundamentalists who prefer the Greek used for the King James) use the same Greek text.  It is a printed edition of the Greek New Testament published since 1965 (with revisions since then) produced by a small but international team of textual scholars assembled and commissioned by the United Bible Societies (various countries have a Bible Society – an organization devoted to the distribution of Bibles and the promotion of knowledge about the Bible: there is one in America, one in Britain, one in Germany, one in the Netherlands, etc; the “United” Bible Societies is the overarching organization with representatives of each country).

The team was assembled in 1955 in order to produce a standard edition of the Greek New Testament, based on an intense study of the available Greek manuscripts, early versions (i.e. ancient 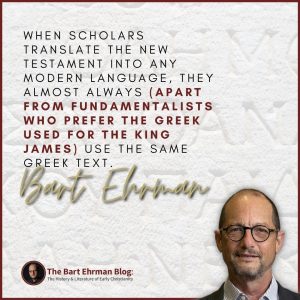 translations of the NT into Latin, Syriac, and Coptic, etc.), and quotations of the NT in the writings of the church fathers (from figures such as Irenaeus, Origen, Cyril of Alexandria, Augustine, and so on).   The purpose of the edition was

to provide an accessible and widely available Greek text to translators around the world who were making translations in languages that, until then, did not have access to the New Testament in their own language, as well as to translators in various countries who were providing newer translations to replace ones already available.

The committee originally consisted of four scholars, and these were among the leading textual scholars in the world at the time (arguably they were *the* leading scholars): Kurt Aland of Germany, Matthew Black of Scotland, Allen Wikgren of the U.S., and (my teacher) Bruce Metzger, also of the U.S.   Later a fifth scholar was added to the team, Carlo Martini of Italy (who was a Catholic priest, then bishop, then the Cardinal of Milan, the largest Roman Catholic diocese in the world; for a time his name was thrown about as a possible candidate to be the next Pope).

Before then there was no standard publication, no one text that everyone could turn to and basically agree on.  This team was supposed to come up with one.

Specifically they were assigned to accomplish the following:

The international team worked on their edition for some years (they all had day jobs, as professors who taught for a living), and their edition then came out in 1965.  It almost immediately became the form of the New Testament that every biblical scholar in the world used.  It is still that today.  It has been revised over the years, slightly, and is now in its fifth edition.  Everyone in the world who is a scholar or student of the Greek New Testament has one.  You can get one!  It’s simply called The Greek New Testament (by the United Bible Societies).

Serious scholars, however, do not actually use this particular edition.  They use a different edition called the Nestle-Aland Novum Testamentum Graece (now in the 28th edition).  It can be a bit confusing to explain, but the wording of the Greek text in this other edition is exactly the same as in the UBS Greek New Testament.  But the apparatus is radically different indeed, in ways that are particularly useful to anyone who is a serious scholar in the field.

In particular, it cites far, far more variant readings in our ancient witnesses, so textual-junkies like me can see what more and more manuscripts have as differences throughout the text.  But the apparatus is harder to use than the one in The Greek New Testament, so many students and modern translators (e.g., missionaries who are translating the New Testament into languages that don’t already have an English version of the Bible) tend to use the latter – then usually care more about the “most likely original” text of the NT, and the truly *major* variations from it, than the textual details professional textual scholars thrive on.

This form of the Greek text is not inerrant.  There are many passages for which the manuscripts provide alternative forms of the text (that is, the passages are worded differently) that scholars continue to debate; in many cases, informed judgments are split, with strong opinions on all sides.  Translators themselves have to make judgments about which of the wordings to translate — and sometimes they choose a variant reading that is different from the standard text widely used.  Most of these differences do not make an *enormous* difference, but some really are significant.  That’s pretty much what I talk about, if you’re interested in pursuing the matter further, in my book Misquoting Jesus.