Video: Does It Matter If Jesus Was Married?

As I think I’ve indicated on the blog before, on January 23, 2014 there was an interesting discussion, on stage, between Karen L. King (Hollis Professor of Divinity at Harvard Divinity School), Mark Jordan (Distinguished Professor at Washington University, Saint Louis; he is returning to Harvard next year), and me on the topic “Does It Matter if Jesus Was Married?” The discussion was hosted by the Black Mountain Institute at the University of Nevada, Las Vegas, in the Beam Music Center, Doc Rando Hall, UNLV. The Black Mountain Institute is an International Center for Creative Writers and Scholars. The event was moderated by the former President of UNLV, Carol Harter, who did a very fine job indeed keeping us all on target and on topic. The basic underlying question was: what would a married Christ mean for the theology, practices, and politics of Christian traditions as they grapple with changing times?  I did manage to say a few words about the prior question: *Was* Jesus married?

The Black Mountain Institute was motivated to invite us to discuss these questions because of the Coptic papyrus that Karen King announced to the world last year, which she has named “The Gospel of Jesus’ Wife.”   I have dealt with it several times on the blog already.  We did not spend any time during the event discussing the authenticity or inauthenticity of the fragment.  My sense is that most Coptic scholars think it is a modern fabrication.  Karen continues to think that it may be authentic, and she is working hard on a scholarly article that will make the case and answer the detractors.  We are all very eager to see it!  In the meantime, whether authentic or not, the fragment raises interesting questions, and those are what we turned our attention to. 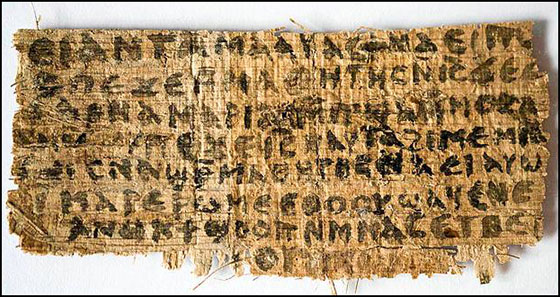 Image rights: Karen L. King/EPA. The fragment consists of eight lines of black ink, written in Coptic, which include the phrase. “Jesus said to them, ‘My wife …’ ” Below it is what the Times calls “a second provocative clause” that reportedly says, “she will be able to be my disciple.”

Search by Keyword or User Name

Bart takes on two of the most gripping questions of human existence: where did the ideas of heaven and hell come from, and why do they endure? In clear and compelling terms, Professor Ehrman recounts the long history of the afterlife, ranging from The Epic of Gilgamesh up to the writings of Augustine, focusing especially on the teachings of Jesus and his early followers… Learn More