Want to Come With Me on a Cruise in the Adriatic??

In February I announced that I would be doing a cruise along the west coast of Croatia in the summer.  The trip was then cancelled as things were looking very bad indeed for international travel.  Now they are so much better.   I’ve traveled overseas several times since getting vaccinated without a single problem.  And the tour companies are going for it again now.

So the trip is back on!   May 29 – June 7.  With an even more amazing itinerary.  It’s now called: TREASURES OF THE ADRIATIC & IONIAN SEAS:  A Voyage From Venice to Athens Exploring Ancient Sites & Medieval Towns.

I’ve included the brochure here, below, so you can see for yourself.  Yes indeed, we start in Venice (!), cruise down the west coast of Croatia with stops along the way, on to Greece, ending in Athens.  Whoa.

The west coast of Croatia is one of the most gorgeous places in the known universe, and this will be my first time to cast an eye on it.  The cruise itself looks amazing.  It’s on a newly built 34-person (17-cabin) yacht with all the amenities.

I’ll be giving lectures, of course, and will be discussing how Christianity came into this area and eventually overcame the pagan religions there – and throughout the empire.  Constantine, the first Christian emperor came from nearby.  This is a region rich in Christian history.

When I’m not lecturing (most of the time) I’ll be spending masses of time with everyone there, enjoying the experience and discussing interesting things.

Thalassa is a terrific tour company, and we will be in very good hands.

Obviously space is limited.  I hope you can think about coming.  Here’s the brochure:

Treasures of the Adriatic Sea with Bart Ehrman 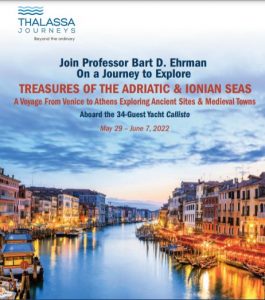