Here is a post by Brent Nongbri, from whom we have heard before on the blog.  His recent book on early Christian manuscripts, especially those of the New Testament, is ground-breaking and insightful.  He will give us a couple of posts devoted to it.  Here’s the first.
–
Brent Nongbri’s most popular books are Before Religion: A History of a Modern Concept and God’s Library: The Archaeology of the Earliest Christian Manuscripts.

Bart suggested that a book I recently wrote might be of interest to readers of this blog, and he invited me to write a couple posts about it. The book is called God’s Library: The Archaeology of the Earliest Christian Manuscripts. It’s an introduction to early Christian manuscripts as archaeological artifacts. What exactly does that mean? Well, lots of excellent scholars have been studying our earliest Christian manuscripts for decades (in the case of some manuscripts, for centuries!), but they have mainly been interested in the texts that these manuscripts carry and not so much in the books themselves as physical objects. It’s of course really important to know what the texts say—to see the textual variants in each manuscript and so forth. But we can miss some crucial things when we focus just on the text and not on the manuscript as an object.

So, what I try to do in my book is approach early Christian books the same way we do other non-textual artifacts. I start with a discussion of the physical characteristics of early Christian books, most of which were in the form of the codex, a book with pages, as opposed to the scroll, which was the main vehicle for the transmission of literature up until the time of the Roman empire.  How were these books made? How do we determine their age? Then I dig into questions of provenance by looking at stories about discoveries of ancient Christian books: In what contexts were they found? How reliable are the stories of their discoveries? Then follows the heart of the book: detailed descriptions of what we can know about three of the really important collections of early Christian manuscripts: the Chester Beatty Biblical Papyri (among which is the oldest manuscript of Paul’s letters), the Bodmer Papyri (which include some of our earliest surviving intact books in the codex format), and the Christian material found in the trash heaps of the Egyptian city of Oxyrhynchus. The book finishes up with what I think is a fantastic story of a set of papyrus fragments of the gospels that were once thought to date to the first century!

In the middle of the nineteenth century, the oldest known Christian manuscripts were what scholars call “the Great Uncials,” magnificent parchment Bibles that survived intact, or very nearly so, through the centuries. The most famous of these is probably Codex Vaticanus. But in the last quarter of the nineteenth century, many ancient manuscripts, including early Christian books from the third or even second century, started turning up in Egypt. You might wonder why this happened at this time. There were many reasons. Some books came from organized excavations, which increased in this time period. But in fact, many early Christian manuscripts from Egypt are said to have been discovered by accident by local Egyptians who were “digging for fertilizer.” This practice also has a fairly specific history in the second half of the nineteenth century. During the American Civil War, U.S. cotton exports plunged, with the result that cotton production in Egypt exploded to fill the void in the global cotton market. Demand for cultivatable land in Egypt rapidly increased, which brought about a corresponding need for fertilizer. A natural source was available in the form of what Egyptians call sebakh. This material consists of the remains of ancient buildings composed of mud-brick (Nile silt mixed with straw) along with centuries’ worth of plant and animal refuse that accumulated in huge mounds surrounding ancient cities. The high concentration of nitrates in sebakh made it useful for fertilizer and also for the manufacture of gunpowder. The second half of the nineteenth century thus saw the large-scale destruction of many ancient sites in Egypt as groups of local workers (sebakhin) dug out ancient sites and transported the sebakh to be spread on fields near and far. So it is no accident that the great age of manuscript discoveries in Egypt began in the second half of the nineteenth century, and many books no doubt were accidentally discovered while people were digging for sebakh. At the same time, because the gathering of sebakh was an activity regulated by the government, it often seems to have provided a convenient cover for the intentional looting of ancient sites.

One of the most interesting characters I encountered in my research was a doctor who treated some of these sebakhin, a man named David Askren (1875-1939). He was a Presbyterian medical missionary who had set up shop in northern Egypt in 1899. Because he treated rural Egyptian workers, he was one of the first non-natives to learn about new discoveries of manuscripts. He eventually developed relationships with local Egyptian workers and dealers and became a main conduit for the selling of manuscripts. His name showed up again and again in my research, especially in American collections. He had a hand in obtaining materials that are now held in the Smithsonian, Columbia University, Princeton, Yale, the University of Michigan, the Pierpont Morgan Library in New York, and even Luther College in Iowa! 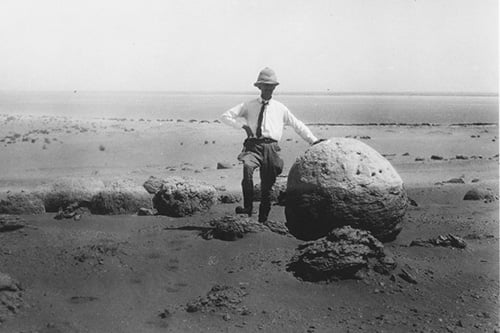 I’ll just tell one of his stories to give you the flavor of these archival records. I mentioned earlier the so-called Beatty Biblical Papyri, so named because most of these eleven papyrus books were bought by mining magnate Chester Beatty. But some parts of these books, including several leaves of our oldest codex of Paul’s letters, ended up at the University of Michigan. How? 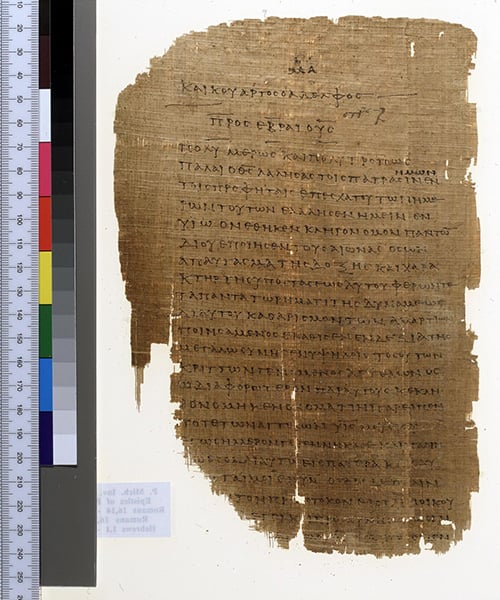 [caption: Leaf of a papyrus codex of the letters of Paul (P.Mich.inv. 6238);
image source: University of Michigan Library Digital Collections]

“We had the Askrens as our guests for Christmas dinner last night and, somewhat to my surprise, the doctor brought with him six leaves of a Biblical codex which had been sent to him by the man from whom we secured our Biblical fragments two years ago and who supplied the Beatty collection…The dealer’s instructions to Dr. Askren were: ‘Bring me the money or bring back the papyri’. Obviously, we could not pay 70 [Egyptian pounds] per leaf without the approval of the Committee, so we compromised by locking up the papyri and telling the doctor to tell the dealer that we had sent for the money. The dealer simply would not bargain . . .” (26 December 1931)

Long story short, the University of Michigan eventually came up with the money and bought the leaves, which they still own today.

In the next post, I’ll talk a little bit about some of the problems we face in assigning dates to New Testament manuscripts using an example that I haven’t yet discussed in print anywhere else!
_________________________________
Other guest posts by Dr. Brent Nongbri: https://ehrmanblog.org/?s=+Nongbri  Biography: Macquarie University, Sydney Australia. ARC Discovery Early Career Researcher. BA University of Texas at Austin; MA, MPhil, PhD Yale University. Research Interests: Early Christianity and ancient Judaism, method and theory in the study of religion, papyrology, textual criticism, archeology, and historiography.  Extended Biography