My New Course for The Teaching Company (The Great Courses)

A temporary “time-out” from my posting on the Jewishness of Matthew’s Gospel.

I received the good news that my new course with the Teaching Company (now called the Great Courses) has become available today.  I am, needless to say, very pleased.   Those of you who have been reading every post for the past few months will remember me talking about the course.  It is called “The Greatest Controversies in Early Christianity.”   As with all the courses I’ve done, this one was 24 lectures in length, each lecture 30 minutes in length.   As I indicated before, these are the topics it covers:

As always, I enjoyed doing the course.  But these things are a bit rough. It’s hard enough giving 24 lectures over the course of four days; but it’s even harder doing it to an empty room, with no audience to feed off of.  The hardest thing is humor.  It’s very difficult telling a joke when there’s no one there to laugh…. 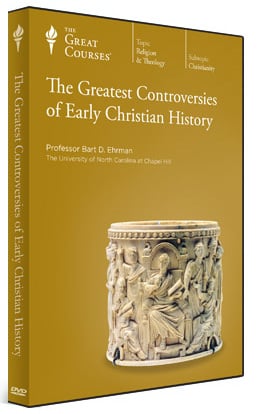 In any event, the course is “audio-only” (no video), so it’s available just on CD.   (That wasn’t my choice: I prefer video; but they needed an audio course and asked if I’d do this one….)

One word of advice: NEVER (as in NOT EVER IN YOUR LIFE) buy one of the Great Courses at full price.  They are regularly and consistently discounted to a ridiculous extent, usually around 70% (so that a $179 course you can buy for, like $49).   That’s still a lot of money, but I think these courses (not mine – just in general) are worth it.  I’ve got a bunch of them myself on various things I’m interested in, and constantly find them to be unusually high quality – well done, well produced, highly informative, and entertaining.

I am about to propose a new course for them, on my next book, “How Jesus Became God.”  There’s no guarantee they’ll do it: in fact, they’ve decided NOT to do a bunch of courses I’ve proposed in the past.  Their procedure is to send out a course description/proposal to hundreds of their customers, and based on their polling, to decide whether to produce it or not.   But I think it would be a great course and I hope they do to.  In the meantime, it’s nice to have this one available now.