Tischendorf and the Discovery of Codex Sinaiticus

PLEASE NOTE: I am incommunicado for a few days on a gulet in the Aegean Sea on the west coast of Turkey. I have asked Steven, our blog support, to add some posts for me in my absence; I prepared these in advance knowing I would be out of reach. Here is one of them. I’m afraid I will not be able to respond to comments on the next few posts until I return to some form of civilization that supports Internet and all things electronic. So sorry!

In my previous post on the discovery of biblical manuscripts, I mentioned the most intrepid of manuscript-hunters of modern times, Tischendorf. His story is very interesting. Here is what I say about him and his most famous discovery in my book Misquoting Jesus.

The one nineteenth-century scholar who was most assiduous in discovering biblical manuscripts and publishing their texts had the interesting name Lobegott Friedrich Constantin von Tischendorf (1815-74). He was called “Lobegott” (German for “Praise God”) because before he was born, his mother had seen a blind man, and had the superstitious belief that this would cause her child to be born blind. When he was born completely healthy, she dedicated him to God by giving him this unusual first name.

Tischendorf was an inordinately ardent scholar, who saw his work on the text of the New Testament as a sacred, divinely ordained task. As he once wrote his fiancée, while still in his early twenties: “I am confronted with a sacred task, the struggle to regain the original form of the New Testament.” This sacred task he sought to fulfill by locating every manuscript tucked away in every library and monastery that he could find. He made several trips throughout Europe and into the “East” (meaning what we would call the Middle East), finding, transcribing, and publishing manuscripts wherever he went.

One of his earliest and best known successes involved a manuscript that was already known, but that no one had been able to read. This is the famous codex Ephraemi Rescriptus, a manuscript at the Bibliothèque Nationale in Paris. This was originally a fifth-century Greek manuscript of the New Testament that had been erased in the twelfth century so that its vellum pages could be used to record some sermons by the Syriac church father Ephraim. Since the pages had not been erased thoroughly, some of the underwriting could still be seen. But it could not be seen clearly enough to decipher most of its words – even though several fine scholars had done their best. By Tischendorf’s time, however, chemical reagents had been discovered which could help bring out the underwriting. Applying these reagents carefully, and plodding his way slowly through the text, Tischendorf could make out its words, and so produced the first successful transcription of this early text, gaining himself something of a reputation among those who cared about such things.

Some wealthy patrons were induced to provide financial support for Tischendorf’s journeys to other lands in Europe and the Middle East to locate manuscripts. By all counts, his most famous discovery involves one of the truly great manuscripts of the Bible still available, the codex Sinaiticus. The tale of its discovery is the stuff of legend, though we have the account direct from Tischendorf’s own hand.

THE REST OF THIS POST IS FOR MEMBERS ONLY. If you don’t belong yet, JOIN!!! It costs very little money, and all of it goes to charity! 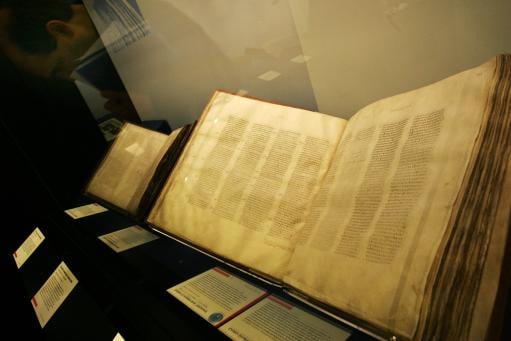