A new discovery has been made of an ancient amulet, of interest to students of the Bible. It contains some references to both the Hebrew Bible and the New Testament. An amulet was a kind of lucky charm that a person carried or wore, in order, principally, to ward of evil spirits. I will say more about amulets as they relate to the use of sacred books (esp. the Christian New Testament) in my next post. For now: here’s news of the new discovery in an article by James Maynard, taken from the Tech Times. 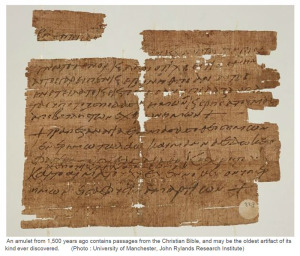 An ancient papyrus amulet with hand-written biblical passages has been discovered. The artifact was likely a tax receipt, and 1,500 years ago, someone wrote quotes from the Christian Bible on the back. The Greek papyrus artifact contains text referring to the Last Supper of Jesus Christ, as well as “manna from heaven.” The ancient amulet containing the papyrus artifact was part of the collection at the John Rylands Research Institute at the University of Manchester in the U.K. Dr. Roberta Mazza, a Research Fellow of the institute, found the item while studying a vast collection of papyrus fragments at the library. “The text says that the receipt was released in the village of Tertembuthis. Therefore we may reasonably guess that the person who re-used the back for writing the amulet was from that same village or the region nearby, although we cannot exclude other hypotheses,” Mazza said.This could be one of the oldest Christian artifacts ever found, according to archaeologists. The jewelry may have been used as a good-luck charm, in which case it would be one of the oldest-known Christian magic charms. The items likely originated in Egypt, dating from just three centuries after the Emperor Constantine converted the fading Roman Empire to Christianity.Ancient Egyptians had a tradition of wearing amulets, filled with prayers to their gods, as protection against danger and evil. As Christianity became the official religion in the Roman Empire, which contained modern-day Egypt, prayers to the ancient Gods were replaced with biblical passages.The Christian Eucharist liturgy, which details the Last Supper, was partially written on the papyrus stored inside the amulet. Verses written in the charm included Psalm 78:23-24, describing manna from heaven, and testimony of the Last Supper in Matthew 26:28-30. The papyrus itself was recycled, using an ancient technique. The manufacturing technique was determined using advanced spectral imagining.On the back side of the biblical text is a faded tax receipt for grain. It was certified by a tax official from the Tertembuthis, an ancient village on the outskirts of Hermoupolis, known in modern times as el-Ashmunein.“The amulet maker would have cut a piece of the receipt, written the charm on the other side and then he would have folded the papyrus to be kept in a locket or pendant. It is for this reason the tax receipt on the exterior was damaged and faded away,” Mazza said. Biblical passages in the charm contain mistakes, including spelling and passages copied out of order. This suggests the text was likely written from memory, rather than copied from another document. This could suggest the Christian Bible was more embedded in the ancient life of Egyptians of the time than previously believed.