Armageddon! My New Book on the Revelation of John.

I’m excited to say that my book on the Apocalypse of John (a.k.a. the Book of Revelation) will be published and available on March 21.  The End is Near! 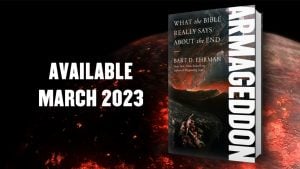 Here is a brief synopsis of what it’s about:

The Apocalypse of John (Book of Revelation) is the most mystifying and misunderstood book of the Bible, and possibly the most dangerous.  Most readers simply refuse to dip into its pages – it is too bizarre, violent, and incomprehensible.

Those who do read it fall into two camps.  Most are conservative Christians who believe the book is describing what is soon to happen in our future; evangelical “prophecy experts” provide detailed explanations to show that the end has now arrived.

Liberal historical scholars, on the other hand, argue that when the book is understood in its own historical context the book is instead a metaphorical expression of hope: the world may appear out of control, but in the end the goodness of God will prevail and those suffering now will be rewarded later.

Armageddon (my book) argues that both views are wrong.

It is certainly right, as the historical scholars argue, that

the Apocalypse is a first-century book meant for first-century readers, with a message directed to them, not one of no relevance for another 2000 years.  Those who have claimed (over all these centuries!) that it was meant to provide a guidepost to the future of planet earth (near in their own time!  And for modern readers, still today!) have not only created massive emotional traumas and bitter disappointments, but their interpretations have led even to mayhem and slaughter.  More recently, in ways one might not suspect, such views have played significant roles in American social and political policy.

But the liberal Christian understanding of Revelation as an expression of hope is also misguided. The word “hope” never appears in the books.   Nor is it about about the love and mercy of God. The book itself repeatedly states that it is about God’s wrath and vengeance soon to be inflicted on the entire planet and most of those who have ever lived on it.  The vast majority of the human race is soon to be tormented and, along with all those who have ever lived, be cast into a massive lake of burning sulfur.

In the end, Armageddon raises a question both vital and ironic, for believers and non-believers alike:  Is the Apocalypse of John consistent with the Gospel of Jesus?

Why I Wrote the Book

In some ways this is a very personal book.  When I was introduced to the Apocalypse of John as a teenager, I readily accepted the evangelical view that it predicted the end of the world soon to come, possibly within a decade.

As I progressed through my studies I began to approach the Bible from a more historical/scholarly perspective and soon realized that this “futuristic” reading of the book was seriously flawed.  John of Patmos was not describing events to transpire in the 20th (now 21st) century; he wrote for a first-century audience with first-century concerns.

Moreover, I came to see just how damaging futuristic readings have been throughout the centuries, leading to emotional trauma and bloodshed.

I shifted then, in my graduate studies, to accept the alternative interpretation widely held among historical researchers:  Revelation provided a message of hope for those who were suffering.  God was sovereign and would “make right all that is wrong.”

When I returned to the book in later years, I realized that even this view is seriously flawed.  Revelation never discusses a God who loves the people of earth and brings hope to the world of sufferers.  It repeatedly emphasizes that it is about a God of wrath who wreaks vengeance on the planet and everyone on it who is (literally) not his “slave.”  Christ himself (not, for example, the Devil or the Antichrist) sends horrendous catastrophes on the earth, leading to global torment, bloodshed, and disaster, and in the end everyone who has ever lived, except for a few of his closest followers, is cast alive into the fiery lake.

In the end *I* argue that the Apocalypse of John is not a blueprint for our future or a message of hope for those who are suffering.  It is a violent book endorsing a form of Christian faith that stands at odds with the teachings of Jesus.

If you are interest in learning more, go to:  https://bit.ly/armgddn and think about pre-ordering (also available, of course, on Amazon).