In the previous post I commented that this idea of trying to follow a star to get anywhere (say, Bethlehem) would lead to problems.  Some years ago I had pointed out that trying to do that would send them around in circles:  since the earth is not “fixed” — it rotates and is in orbit around the sun — stars are never in the same place in the sky, so “following” one would take you all over the place.

After posting on that, I found a hilarious illustration of what would happen if the wisemen followed a celestial body to find Jesus. I have borrowed this (no permission required, only acknowledgment) from here: http://what-if.xkcd.com/25/

The story of the three wise men got me wondering: What if you did walk towards a star at a fixed speed? What path would you trace on the Earth? Does it converge to a fixed cycle?

If the wise men leave Jerusalem and walk toward the star Sirius, day and night, even when it’s below the horizon, this is the path they follow over the surface: 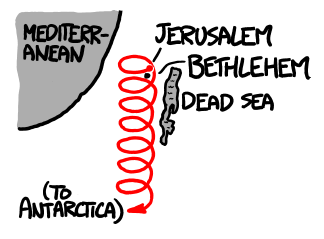 If we allow a little theological confusion and assume the wise men can walk on water, they’ll eventually wind up going in an endless circle, 30 kilometers in diameter, around the South Pole.

But let’s be a little more realistic; the wise men are

Get access to Dr. Ehrman's library of 4,000+ articles plus five new articles per week about the New Testament and early Christianity. It costs as little as $2.99/mth and every cent goes to charity!

In that case, their path actually takes them through Bethlehem: 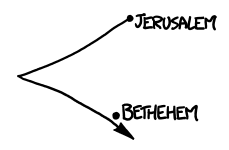 If they don’t stop there, after a few years, they wind up orbiting Botswana: 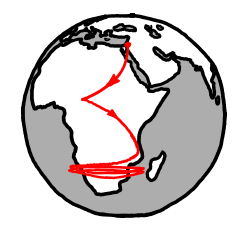 These paths are calculated using, among other things, PyEphem, which provides tools for determining the historical positions of astronomical objects.

It’s tricky to figure out exactly what the wise men would have been following. There aren’t very many good astronomical candidates for the Star of Bethlehem (Chinese records don’t show a supernova at the right time, and none of the other obvious candidates check out) and, furthermore, there’s a lot of historical and theological debate over Jesus’s date of birth (“4 BC” seems to be the closest thing to a historical consensus date). These charts are all calculated for a somewhat arbitrary departure date from Jerusalem of December 25th, 1 AD; different departure days would lead to different paths, but the overall picture would be the same.

What if the wise men followed a planet?

Planets move against the background of stars, so the paths they produce are more complex. Here’s where the Wise Men would’ve gone if they followed Venus: 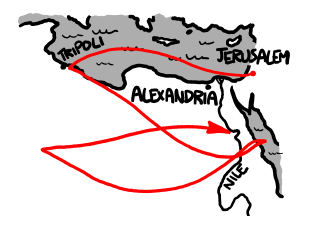 And here’s their path for Mars: 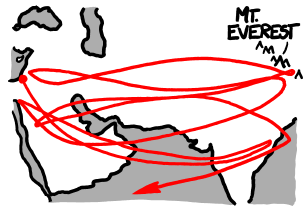 If the three wise men had a hovercar that could move at highway speed over land and water (it’s in the gnostic gospels somewhere) and decided to follow Venus, they’d take a particularly weird path: 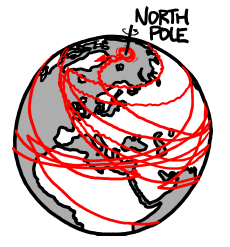 At one point, they wind up near the North Pole in October. There, the Sun and Venus spend months near the horizon, rising and setting, nudging the Magi into a month-long spiral around the pole, a chaotic strange Magi attractor around the North Pole which some argue provides the theological foundation for the story of Santa Claus [citation needed].

Sadly, the three wise men probably weren’t following Venus. It’s one of the most familiar objects in the night sky, and as the late Sir Patrick Moore observed, if the wise men mistook it for a new star, they couldn’t have been very wise.

But maybe they’re wiser than Sir Patrick gives them credit for. After all, if you pick a random star in the sky, point at the horizon, and predict that there’s a baby about to be born in that direction, statistics—and birth rates—are on your side.