Was Paul the Founder of Christianity? If Not, Then Who Was? 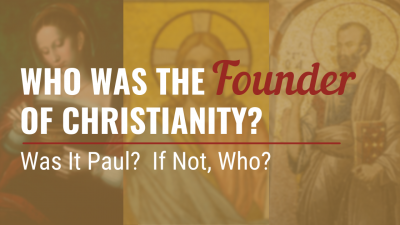 The idea behind this claim is that Christianity is not really about the historical Jesus.

And this is what Paul preached, not what Jesus preached.

Paul vs. Jesus: Who is the Christianity Creator?

I’ll discuss both contradictions (the first in this post, the second in the next), but before doing so let me be clear and emphatic: I do NOT think that Paul and Jesus delivered the same message in their preaching, or that they did so in the same way.   There was an enormous difference between what they taught.

There are points of contact and continuity, to be sure.  But the differences are stark and need to be borne in mind constantly.

Jesus preached that the Kingdom of God was soon to arrive with the appearance from heaven of the Son of Man.  People needed to prepare for that imminent catastrophic event by turning to God and living in the ways that he decreed through the proper observance of the Torah, principally by loving (and trusting) God above all else and by loving their neighbors as themselves.  Those who did so would survive the coming onslaught and would be brought into the Kingdom.

Paul agreed that there was an imminent disaster to take place.  But in his view, that would happen when Jesus himself arrived from heaven in judgment.  The way a person would survive the onslaught was not by obeying the Law of God or by loving their neighbors as much as themselves.  Salvation would come only by believing in Christ’s death and resurrection.

(Click here to learn more about Paul’s importance to Christianity.)

In other words, Jesus preached about God and his coming Kingdom; Paul preached about Christ and his death and resurrection.  Important similarities, yes; but also fundamental and crucial differences.

Why Paul Was Not the Founder of Christianity

Was Paul the Founder of the Christian Religion? As I indicated, saying so contradicts both the facts of history and the statements of Paul himself.

As we saw in earlier posts, Paul was originally antagonistic toward the Christians and worked hard to “destroy” (his word) the church.  Thus both Paul and the book of Acts insist strongly that he started out not as a follower of Jesus but as a persecutor of his followers.

(In a later post, I’ll talk about what it was about the Christians and their claims that incensed Paul and made him want to oppose them with violence.  *Update: here’s the article.)

But for now, I want to focus on the fact that prior to Paul there were Christians who were already making bold claims about Christ.  Where did these Christians come from?  Obviously from another founder of Christianity (not named Paul).  Again, both Paul and Acts are clear on the point: these were people who believed that God had raised Jesus from the dead for salvation.

Who is the Founder of Christianity? Remember Paul was Persecuting Christians

If Paul was the Christianity creator, there would have been no one for him to persecute prior to his conversion.  But he was persecuting Christians.  They, therefore, had to exist.  And they could not have existed simply as a group of Jews in rural Galilee who subscribed to Jesus’ distinctive understanding of the Jewish law.  Paul was persecuting Christians outside of Palestine and they must have been saying things other than “love your neighbor as yourself because the end is coming soon.”  There is nothing blasphemous about that.  They almost certainly were saying something blasphemous about Jesus himself.

When Jesus was living, his disciples (some of them?  All of them?) appear to have wondered if or thought that, he was the Messiah.   His arrest, trial, and crucifixion showed them that they had been wrong.  He clearly was not the Messiah.   But when they came to believe that he had been raised from the dead, they “understood.”  That is to say, they reinterpreted what they had previously thought in light of the new situation.

They came to see that Jesus was indeed the Messiah, the one whom God would use for salvation.  But it was not that he would overthrow the Roman armies or set up a kingdom in Jerusalem.   He was a different kind of messiah.  One who had to die for the sake of others.

Paul found this blasphemous, for reasons I’ll spell out in a later post.  But for now, it’s enough to say that Paul did not invent the resurrection.  In fact, he was persecuting people for already having some such view.

The fact that the early followers of Jesus, after his death, focused their beliefs on his messiahship is shown in a number of ways, not least in the way they spoke of him.  The term “messiah,” of course, is the Hebrew term that gets translated into Greek as “Christ.”

The early Christians did continue to use the name “Jesus”; but from the beginning, they also called him “Jesus the Messiah” (i.e. “Jesus Christ”) or they would refer to him simply as “the Messiah.”  “Christ” very early became almost like a last name.  That’s because they used it so frequently of him.   And that was almost certainly before Paul came on the scene two or three years later.

Finally, Paul explicitly indicated that he was not the one who created the “gospel,” but that it was Christ’s death and resurrection that brought salvation.

Was the Apostle Peter the Founder of Christianity Religion?

The argument for Peter as Christianity’s founder goes something like this:

This series of events was popularized by German New Testament scholar, Gerd Lüdemann, in his book, The Resurrection of Christ: A Historical Inquiry (2004).

So, in a sense, you could say that if Jesus did not actually rise from the dead, Peter was initially responsible for igniting the spread of Christianity.  For this argument to work, one must only assume that Christianity would not have survived without the resurrection story.  I’ve argued multiple times that this is likely the case.

Peter’s Role in the Early Growth of the Church:

There is no doubt that Peter became dominant as the leader of the church early in the Christian movement.  We have scores of passages that talk about Peter, his involvement with Jesus during his life, and his leadership of the church after his death.

But none of these mean he invented or founded Christianity.  Although it may be appropriate to give him the title of the first “Christian” if Paul is correct in I Cor. 15:3-5, which says that Peter was the first to see the resurrected Jesus.

My view is that Peter really did think he had a vision of the risen Jesus, and that’s what prompted him to share the vision with the other disciples.  I don’t believe he made it up.  If he had made it up, you could possibly call him the “founder” of the Christian faith.  But since I don’t believe he did, I still think Jesus is the more appropriate candidate for that title.

Was Mary Magdalene the Founder of Christianity?

A moment ago, I quoted I Cor. 15:3-5 where Paul cited Peter as the first person to witness Jesus raised from the dead.

You may have realized, however, that the Gospels tell a different story.  The Gospels say that Mary was the first.  What if they’re right?  Wouldn’t it make better sense to say that Mary started Christianity?

The evidence for Mary being the first to witness Jesus is summarized as follows:

If you’d like to dive deeper into this line of thinking, please see my post titled “Is Mary Magdalene the Founder of Christianity?”

The True Origins of Christianity

Not all scholars agree that Jesus, Peter, Mary, and Paul should be called “Christian.”  Once the earliest followers of Jesus believed in his resurrection, you must keep in mind they were still fully Jews.  They were Jews who believed in Jesus as the Jewish Messiah.

These same scholars would argue that Christianity was a religion distinct from Judaism.  In this view, Christianity didn’t really start until it developed its own beliefs and practices (such as baptism, eucharist, and weekly meetings), none of which would require one to adhere to Judaism.  You might argue then that Paul’s first gentile converts were the first true Christians.

You can learn more about this concept in my article titled, “How Did Christianity Start?”

Additional reading you may enjoy related to when and where Christianity originated are:

As it turns out, the question of “who founded Christianity?” turns out to be a difficult one to answer.  It depends on your definition of the word “Christian.”  Jesus’ followers during his ministry were certainly followers of Christ, so you could call them Christian by that standard, but their beliefs certainly did not match the beliefs of mainstream Christians today.

I personally tend to think of Jesus as the founder of Christianity.  Whether it was Mary or Peter who first claimed to see him after his death, or it was Paul who was responsible for taking the message of his resurrection to the first gentiles, I believe their message was based on the man, Jesus.